Arsenal have been in contact with Getafe over a potential deal for Djene Dakonam – but the €35m asking price remains a sticking point.

Unai Emery is in the market for a new centre-half this summer after the Gunners boss made it one of his top priorities of the summer window. Arsenal are also likely to lose Laurent Koscielny, with the veteran Frenchman receiving an offer to return to Ligue 1. With just a year left on his contract, the Gunners will likely move him on – but it will mean reinforcements will be sought.

And Dakonam is the man Emery is believed to have settled on, though the Gunners are looking to talk Getafe down from the £31m exit clause that exists in the 27-year-old’s contract.

The Togo international has excelled for Los Azulones since joining the Madrid-based club from Belgian club Saint-Truden back in 2017, with his form also bringing him to the attention of the likes of Barcelona, Atletico Madrid, Valencia and Sevilla.

But it is Arsenal who, according to AS, have made the first move to sign the defender, who can also fill in at right-back if needed.

The Spanish paper claims Arsenal have contacted Getafe to register their interest and let them know of any developments regarding their willingness to sell.

But with the Madrid-based side seemingly determined to hold out for their full asking price for Dakonam, Emery and Arsenal will have a decision to make over their efforts to bring him to north London.

Back in December, Marca quoted Getafe president Angel Torres as saying: “If I decide to sell Djene then [Getafe Coach, Pepe] Bordalas is gone!” 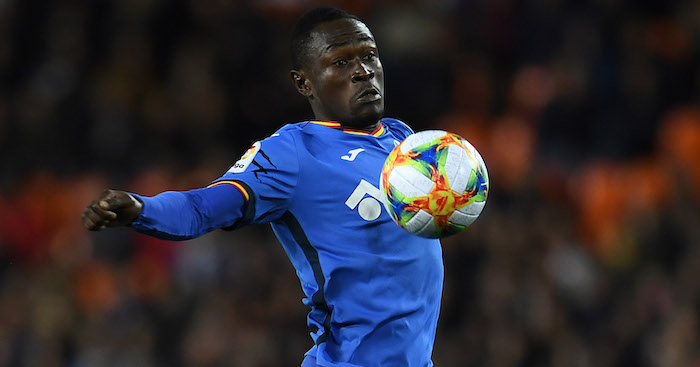 The Spaniard is working with a reduced budget this summer after the Gunners failed to qualify for the Champions League and the club may have to sell before they can buy; as such, reports on Tuesday suggested they could allow a fans’ favourite to move on if a generous offer comes their way this summer.

Arsenal, meanwhile, are reported to be closing in on their first signing of the summer, with a deal for Dalian Yifang winger Yannick Carrasco said to be nearing a positive conclusion.

Get the latest personalised Arsenal products on our new TEAMtalk Gunners shop!

Arsenal have been in contact with Getafe over a potential deal for Djene Dakonam – but the 35m asking price remains a sticking point.
Unai Emery is in the market for a new centre-half this summer after the Gunners boss made it one of his top priorities of th…