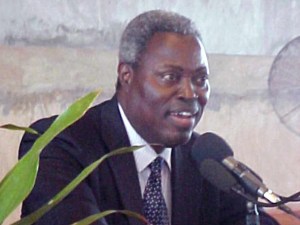 General Superintendent, GS, Deeper Christian Life
Ministry, DCLM, Pastor Williams Kumuyi has
described President Muhammadu Buhari’s fight
against corruption as a step in the right direction
which should be supported by all Nigerians.

In a chat with journalists, Kumuyi who was in
Aba, Abia state on Sunday for a unique combined
worship service of the church at the Abia State
Polytechnic playground, said “I am a layman
when it comes to politics. But from what we can
see, I believe that the President is in the right direction and if we support him with our
comments and in other ways, I believe that we
will see corruption brought down very quickly.”

He stated that the Church can help the President
in the fight against corruption by teaching
members to shun evil conducts and contribute
positively to the progress of the country.

“When we say the church, we are not just talking
about buildings; we are talking of people who
come to church and also go to offices. For the
church to support the fight against corruption,
preachers must teach our people to learn how to
contribute positively to the progress of the country wherever they are .If you are a governor,
commissioner, teacher, minister and among
others; do your best for the country. Don’t think
of what you can get out of the place that you are
working, but how they can contribute to the
place in order to support the efforts of the government.”

The cleric advised political office holders to lead
with the fear of God and always remember to
fulfill their campaign promises, insisting that they
must see themselves as servants of the people
who elected them into office.

Earlier in his sermon which centred on ‘The
Riches of Christ’s Supernatural Love”, Kumuyi
described God’s love for man as inexhaustible
and beyond the imagination and understanding
of man, adding that it was because of God’s love
for man that made Him to send His only begotten son to die to redeem and reconcile man back to
God.

According to him, “God is on a rescue mission
and is ready to reach out to the deepest part of
the earth to rescue anyone who wants to turn a
new leaf. The reason why I’m in Abia state is that
Abia is Gods Own State; I will like to plant in a
place where the seed will germinate.”

Highlights of the cleric’s visit at the program titled;
“Open for Extra-Ordinary Blessings”, was a
special prayer session for the sick, church, Abia
State and the entire country.